When starting with iOS development, I remember struggling with Apple’s certificates, provisioning profiles and identifiers. So did one of my friends for which I wrote a quick introduction that he thought could be useful to others.

So here is a quick explanation.

Referenced under different names on XCode and the web interface, it is the unique ID of an application, for exemple at Fovea: 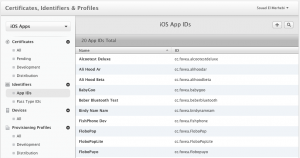 Certificate (or developer name under XCode)

To do so, one has to use a Distribution Certificate.

It is a file included in the Bundle of the application (the archive if you like). iOS with check the validity of the provisioning profile to authorise or not the execution of an app on the phone.

The development provisioning profile is managed by XCode, so it’s not to complicated (as it once was).

However, to distribute an app, you’ll have to create a distribution provisioning profile. It associates an App ID, a certificate and a list of device UDID. Here’s an example that I use for Beta distribution of Ali Hood: 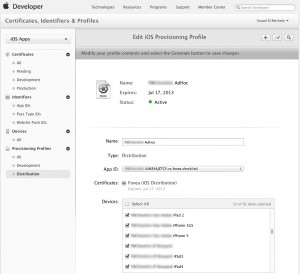 Once created, it should be downloaded and clicked to install it on XCode. Then it can be defined a the provisioning profile in use from the XCode project settings.

I’m a consultant and developer for Mobile, Web, Games and Apps projects. I co-founded Fovea 8 years ago.